Abstract. To help to address the paucity of ecological knowledge available for Brachypelma vagans Ausserer 1875, a CITES protected species, we monitored a population in Western Belize for two years to provide data for distribution and dispersal. Despite previous over-collection for the pet trade, the species is locally highly abundant in some areas of Belize. We recorded the distribution, burrow and spider characteristics of B. vagans in 2007 and 2008 at Las Cuevas Research Station, Belize. Population dynamics were compared between years, as was individual location. Over 100 burrows were located in both years; however, previous assumptions that individuals do not move burrows regularly appear negated, since only 12 burrow locations matched between years, suggesting high intra-habitat dispersal. Despite this apparent high level of movement burrows were significantly clumped, to a similar degree, in both years. This movement could be due to disturbances throughout the year, including flooding during the rainy season. Burrow size correlated with individual body size, except in a few juveniles that appear to have opportunistically claimed an empty burrow, accounting for some small animals found in large burrows.

Abstract. The genus Plesiophrictus is diagnosed and redescribed based on type material and additional specimens. The type species P. millardi (Pocock 1899) is redescribed. The genus Heterophrictus is revalidated, with H. milleti as type species. Heterophrictus differs from Plesiophrictus by the absence of serrula on maxillae and by having a rastellum on the chelicerae and stiff, spike-shaped setae on the prolateral coxae I. The significance of characters used in the taxonomy of both genera is discussed.

Abstract. The taxonomic status of four species of Avicularia Lamarck 1818 described from Uruguay: Avicularia anthracina (C.L. Koch 1842), Avicularia alticeps (Keyserling 1878), Avicularia parva (Keyserling 1878) and Avicularia tigrina (Pocock 1903) is discussed. The holotypes and/or original descriptions of these species were examined, and two taxonomic synonymies are needed, which are presented herein. Avicularia anthracina is transferred to Grammostola, resulting in Grammostola anthracina (C.L. Koch 1842) new combination and is considered a senior synonym of Grammostola mollicoma Ausserer 1875 new synonymy. Likewise, Avicularia parva is transferred to Catumiri Guadanucci 2004, where it is placed in the synonymy of Catumiri uruguayense Guadanucci 2004 new synonymy. Avicularia tigrina and Avicularia alticeps, originally described in the genera Ischnocolus Ausserer 1875 and Pterinopelma Pocock 1901, respectively, are herein considered nomina dubia since their types are presumed lost.
Átélte Zoltán majd aztán leírta ekkor: 7:20:00 AM No comments: A bejegyzésre mutató linkek Abstract. Intraspecific interactions of araneomorph spiders have received considerable attention, but there are few detailed studies on intraspecific interactions of mygalomorph spiders. Moreover, a thorough understanding of theraphosid biology and ecology is necessary from a conservation standpoint because natural populations may be threatened by habitat disturbances and captures for pet commerce. We described the behavior of conspecific individuals of Grammostola schulzei during non-sexual interactions, under laboratory conditions. Pairs of individuals involving adult males, adult females and juveniles were confronted and observed in resident and intruder conditions, totalizing 115 trials. When confronted two adult females, they retreated or grappled, and performed gaping display with bite attempts, usually resulted in severe injury of the intruder spiders. When confronted females with large juveniles, we frequently observed cannibalism on juveniles. Juveniles exposed to females or to other juveniles retreated or made leg tapping with forelegs and palpal drumming, which are common displays of courting adult males. Adult males courted and clasped some juveniles, but juveniles avoided or reject clasping. The behaviors observed during intraspecific interactions could play an important role determining spatial distribution and could lead to behavioral adaptations of territoriality. Rev. Biol. Trop. 59 (3): 1173-1182. Epub 2011 September 01.

Abstract. In the Yucatan Peninsula, the tarantula Brachypelma vagans Ausserer 1875 is commonly associated with human settlements, as are the scorpions Centruroides gracilis Latreille 1804 and C. ochraceus Pocock 1898. Nonetheless, scorpions are virtually absent from villages showing a high density of tarantulas. Predatory interactions between these predators could explain the lack of local overlap. To test this hypothesis, we observed the behavioral interactions between B. vagans and C. gracilis or C. ochraceus in experimentally controlled conditions, and we compared these interactions to interactions between the tarantula and two prey species: cricket and cockroach. For observations, a pre-adult tarantula was placed in an experimental arena in which we introduced either a scorpion or an insect. In all, 115 trials were performed. We recorded time elapsed and behavioral responses: avoidance, attack, escape, capture, and attack success. Tarantulas preyed on all prey with the same attack success (63.8% ± 0.8%), but they attacked and captured cockroaches quicker and more often than the other prey (87% vs. 50%, and 57% vs. 30%, respectively). Scorpions attacked tarantulas in 25.5% of occasions, but they were never successful, and were killed in 9% of occasions. We conclude that tarantulas are potential predators of scorpions. Moreover, in villages where tarantulas are abundant they might prevent the presence of scorpions. Thus the presence of this non-aggressive tarantula may be beneficial from the human perspective.

Abstract. The metabolic and water evaporation strategies in spiders may be part of a set of physiological adaptations to tolerate low or unpredictable food availability, buffering spiders against environmental fluctuations such as those of the high mountains of the central Andes.

The aim of this study is to analyze experimentally the variations in metabolic rate and the rate of evaporative water with food and/or water restriction in a high mountain mygalomorph spider population (Paraphysa sp.).

We found that the low metabolism of this spider was not affected by water restriction, but its metabolism was depressed after 3 weeks of food deprivation. The spider did not show seasonal metabolic changes but it presented seasonal changes in the rate of evaporative water loss at high temperatures.

These findings constitute a set of possible adaptations to a highly fluctuating Mediterranean environment, which is completely covered with snow for many months and then progresses rapidly to a very dry climate with high temperatures.


Abstract. Studying the locomotive behavior of animals has the potential to inspire the design of the mechanism and gait patterns of robots (“bio-inspired robots”). The kinematics characteristics of a spider (Ornithoctonus [sic] huwena), including movement of the legs, movement of the center of mass (COM) and joint-rotation angle, were obtained from the observation of locomotion behaviors recorded by a three-dimensional locomotion observation system. Our results showed that one set of the stance phase consists of four legs, which were leg-1 and leg-3 on one side and leg-2 and leg-4 on the other side. Additionally, two sets of the stance phase comprised eight legs alternately supporting and driving the motion of the spider’s body. The spider primarily increased its movement velocity by increasing stride frequency. In comparison to other insects, the spider, O. [sic] huwena, has superior movement stability. The velocity and height of COM periodically fluctuated during movement, reaching a maximum during alternation of leg phase, and falling to a minimum in the steady stance phase. The small change in deflection angle of the hind-leg was effective in driving locomotion, whereas each joint-rotation angle of the fore-leg changed irregularly during locomotion. This research will help in the design of bio-inspired robots, including the selection of gait planning and its control.

Abstract. Landscape fragmentation usually has a considerable effect on the genetic and demographic viability of most species because it reduces population size and increases isolation among populations. This situation provokes loss of genetic diversity and increased inbreeding that can lead to population or species extinctions. Some studies also show that landscape fragmentation may have no effect on or even positive consequences for species genetic diversity. The protected tarantula, Brachypelma vagans, exhibits a particular situation in the Mexican Caribbean, which has experienced high lowland and coastal fragmentation because of recent increases in agricultural, urban and touristic development. This modified landscape structure creates favorable conditions for establishment of B. vagans populations in rural settlements. Populations of this tarantula have high densities of individuals, principally females and juveniles, and gene dispersion is assumed by the rare males. Within this context, we studied the influence of natural and anthropogenic fragmentation on the genetic diversity of six B. vagans populations (five continental, one insular), together with their spatial organization. Our approach used seven inter simple sequence repeat markers, which are highly polymorphic markers. The 76 loci selected revealed high genetic variability for continental populations and a low, but not critical situation, for the insular population. We detected a good level of gene exchange among continental populations, and an evident and recent isolation of the island population. This species exhibits a metapopulation structure in the lowlands with numerous local populations where mature females exhibit high birth site fidelity. We conclude that this protected species does not exhibit characteristics to warrant its current conservation status, and we propose complete revision of the ecological and genetic situation for B. vagans in particular, and for all species within the genus Brachypelma in general.
Átélte Zoltán majd aztán leírta ekkor: 1:02:00 PM No comments: A bejegyzésre mutató linkek 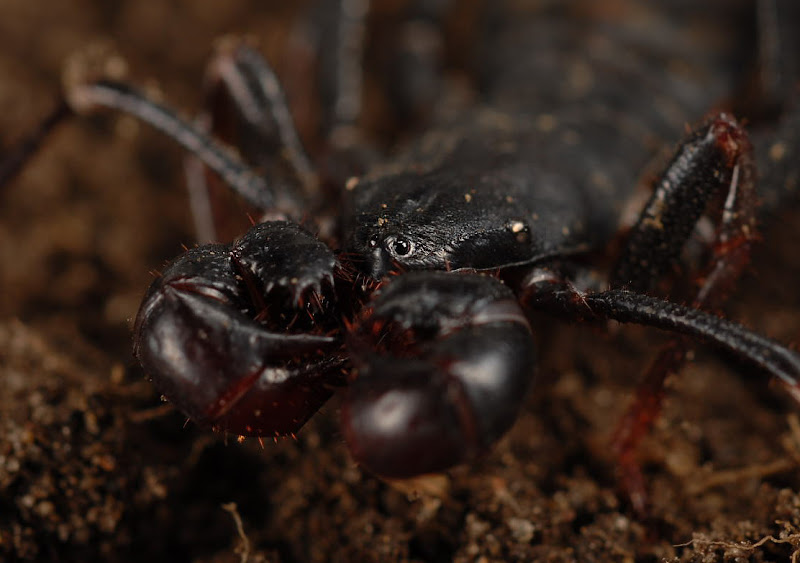 Pocock, R. I. 1903. On some genera and species of South American Aviculariidae. Annals and Magazine of Natural History (7) 11: 81–115. Kattints ide a letöltéshez!

Chamberlin, R. V. 1917. New spiders of the family Aviculariidae. Bulletin of the Museum of Comparative Zoology at Harvard College 61: 25–75. Kattints ide a letöltéshez! 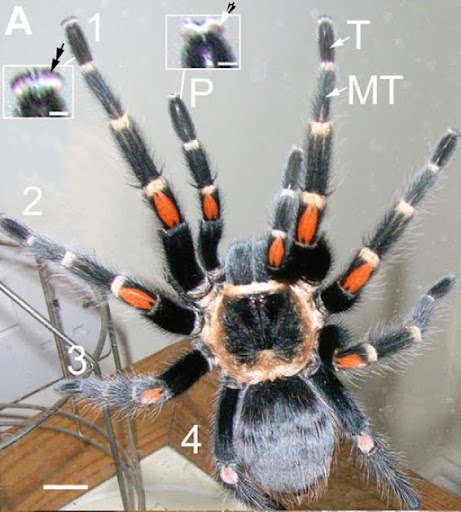 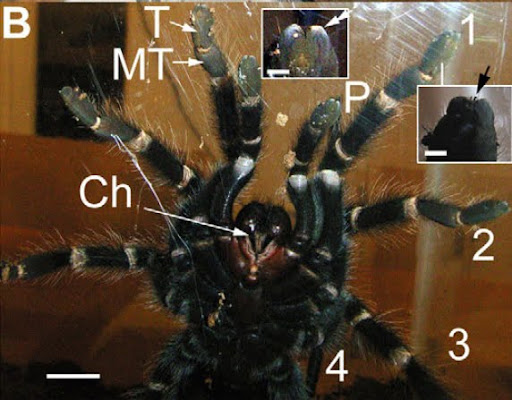 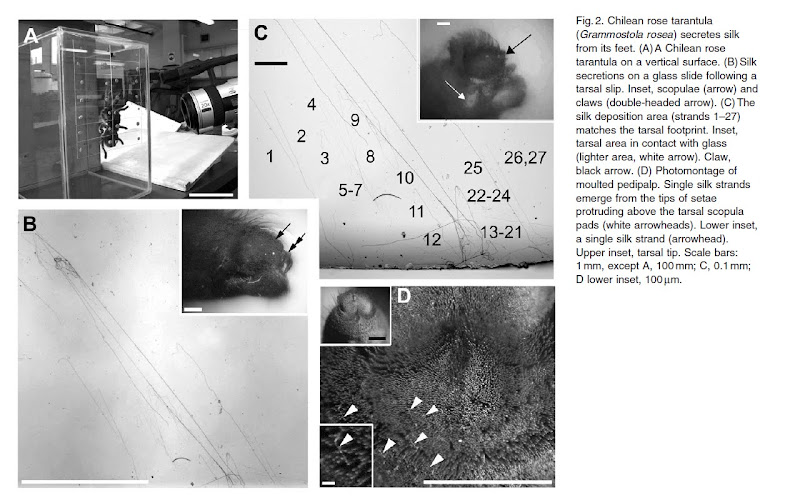 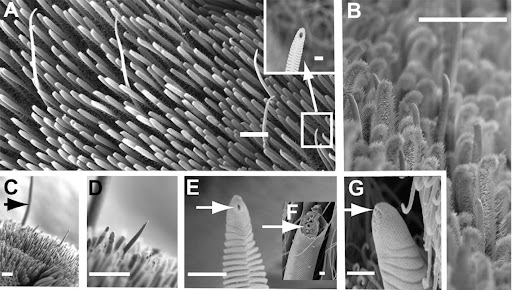 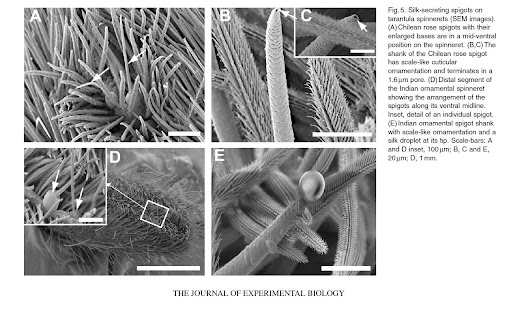 Email ThisBlogThis!Share to TwitterShare to FacebookShare to Pinterest
Címkék Hírek a nagyvilágból, Madárpók

If you don't speak Hungarian